From his iconic rounded spectacles to shaggy hair and a peace-loving, laidback style, John Lennon’s fashion taste has pervaded decades and remains one of the most tasteful, distinctive celebrity wardrobes of the 20th century. When it comes to this look, iconic doesn’t even begin to cut it. The statement fur coat piece is fit for a rockstar, of course, and paired with John’s simple white turtleneck layered under a black shirt with black pants, this look is the perfect combination of edgy without being over-the-top. For the past few decades, name “John Lennon” has been almost synonymous with the word “peace”—and for good reason. The soul behind Imagine carried his message of love throughout his life, including bringing it into fashion and wearing peace on his sleeve—literally. And with the paisley button-up and tinted orange glasses to complete the laid-back denim jacket look, it’s no question why this look iconic look remains a fan favorite. 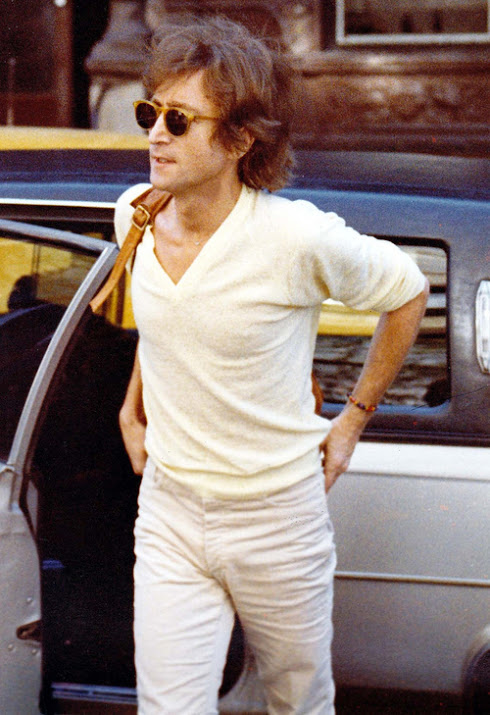 An all-white ensemble is hard to pull off, but when done right, it screams “taste,” “sophistication” and “effortless class”—and John Lennon does it right. The look is so simple yet so striking, especially with the brown details of his bag, bracelet, and shades. Image via The Golden Yearz

This ’67 flick of John, Paul McCartney, and Ringo Starr is iconic for so many reasons, one of the most notable being what John is wearing. I mean, the indigo pants with the chunky black belt, groovy green printed patterned button-up and the statement coat with white fur trim? The look exceeds all fashion expectations (especially when juxtaposed with the more dressed-down approaches of Paul and Ringo) and the mullet is just the icing on the cake to complete the look. 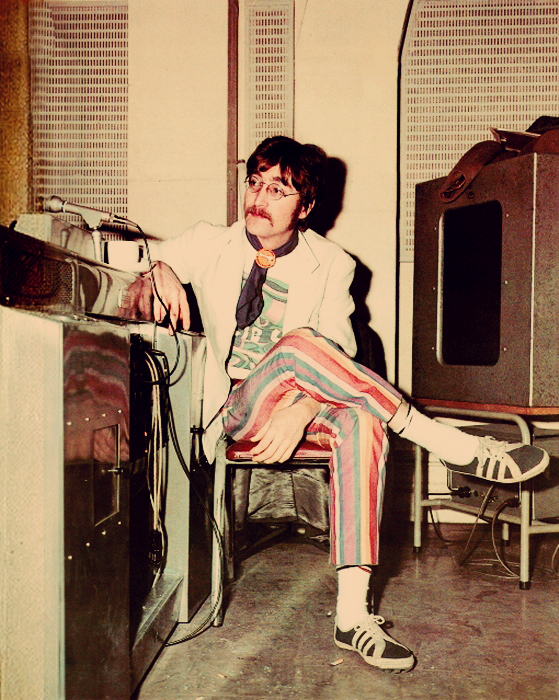 It’s evident that John Lennon was somewhat of a Renaissance man, adept not only in music and the arts but in fashion, too. After all, this tube-socks with the striped pants and baby blue blazer over the graphic tee look would be fantastic in and of itself, but in a Lennon-esque fashion, John truly takes it to the next level with the simple addition of the bold tie around his neck. Matching outfits with your bae is always cute, but no one ever did it like John Lennon and Yoko Ono. Their matching black shiny boots, black pants and sleek black blazers are suave and cool, and John’s tiny black shades and cap tie the whole thing together. The American flag overalls would be a look in any environment, but a walk in the park with Yoko Ono is just the right setting for them. And with the long black overcoat to dress up the denim, John proved yet again he was a master at not only mixing music, but mixing fabrics, too. Saving the best for last, this might be one of Lennon’s best looks. Before Britney and Justin, there was John Lennon, and rocked an all-denim outfit like nobody else. And with the wind-tousled hair, signature shades and suede cowboy boots, it’s fair to say this look was just another one of the many trends we can credit to Mr. Lennon.